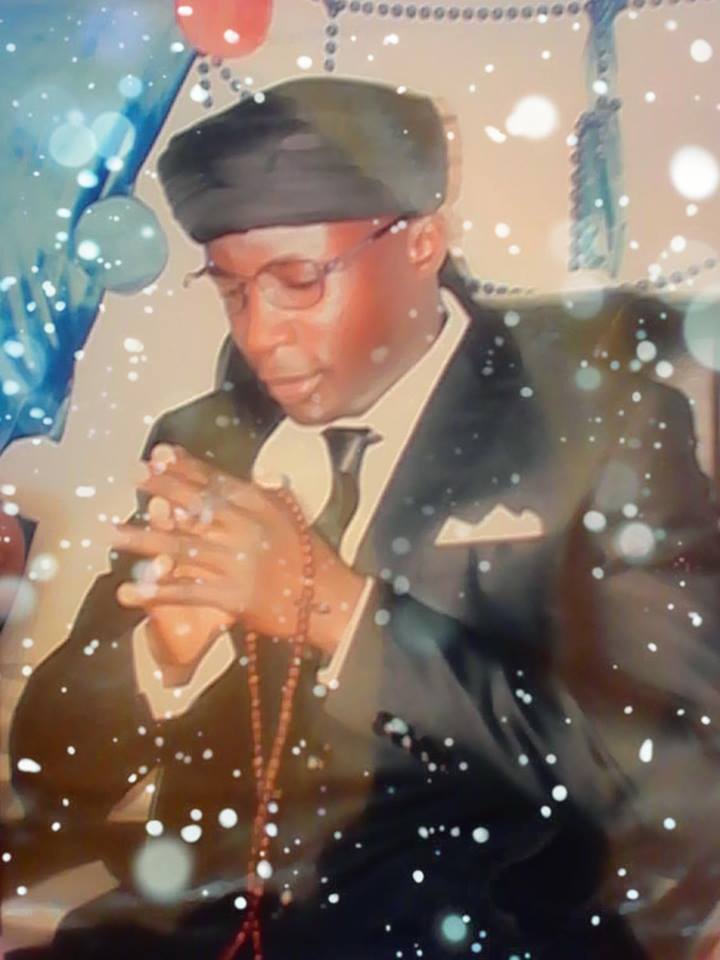 The man with the mystical name of Seydi Mouhamed El Cheikh was born on April 10th, 1983 in St. Louis, Senegal, in a family that follows the Khadriya Sufi order (Tariqa). He would be the only member of this family that did not join this path, in favor of the Tidjaniya Tariqa, where he became a major Khalif.

As a child, Sanguebi had to attend Quranic and French schools, until the third grade. In 1997, his mystical journey began. During that year when he was 14 years old, he met Mawlaya Cheikh Ahmad At-Tijani accompanied by the Khoutboul Akhtaab named Cheikhou Oumar, while meditating under a tree in Misra of Sor.

Sanguebi reported that during this prodigious encounter, it was the first time that Mawlaya Cheikh called him by the name of Seydi Mouhamed El Cheikh. While he did not want to step forward towards him because of fear, his feet felt like being controlled. Then the great Cheikh said, “When I call a person it is not only for him to answer but rather his soul answers me.” Sanguebi says at that moment, he felt the power of a particular being, recognizing the greatness of Cheikhou Tidjani. He gave him the Tidjani “Wird” and ever since, Seydi Mouhamed El Cheikh sees Mawlaya Cheikh every single day.

The place of this meeting was not random. It was well chosen since this tree was one of the elements from the Ghayb invisible world, which contained a particular reality in holy history. After revealing the spiritual role of this tree during the Mawlid 2009, Sanguebi informed the audience that it is no longer necessary to return there since the secret has been moved back to the Ghayb.

Following this meeting, Sanguebi began his spiritual training transmitted by Mawlaya Cheikh through the Khoutb named Serigne Babacar Sy. He also attributed the title of “Sanguebi” (Seydi in Arabic) to him, which he dictated in a revelation to one of his fervent disciples.  Sanguebi continued to make his Zikr often in the mosque of “Diaamihoun Masjidoul Nour” in northern Senegal. Serigne Babacar brought him the Zikr scheme that he applied for seven (7) consecutive years. In 2004, Seydi Mohamed El Cheikh founded the Dahiratoul Imaane under the orders of Cheikhou Tidjani. The first head-quarter of the Dahira was in Ndiolofen of St. Louis while Sanguebi resided in Sor.

For a while, with some of his disciples, he did the Wazifa and the Khadaratoul Jummah zikr sessions in this mosque until it was moved to Pikine. There, the circle would contain only Sanguebi’s disciples. Thereafter the hot complexion due to his young blood, newly mixed with the Zikroul Oulouhiyaat light, would be uncontrollable.

On Monday, April 10th, 2006, at the age of 23, Sanguebi held his first “Mawlidou Nabi” edition which took place in Sor Diagne. During the ceremony, he was able to deliver a speech from midnight to 6:00 a.m., and was much appreciated as a successful test by all the audience of the “Khadaratoul Ilaahiya” divine assembly. The latter is the place of gathering for Awliyas held every Thursday night in the sixth heaven. It is presided by the Prophet Seydi Ahmed, the source of the blessings, as President; by his legendary supremacy Mawlaya Cheikhou Tidjani as Secretary General; by the greatest Pole Khoutboul Akhtaaboul Kabîr as a representative of Mawlaya Cheikhou Tidjani; by the contemporary pole “Khoutbou Zamane” responsible for holding the speech and by all the saints who completed their spiritual training and approved by the Khoutbou Zamane.

Seydi Mouhamed El Cheikh began assisting in this assembly of saints at the age of 14, although he first attended at the age of 9. Being Mawlaya Cheikh’s Khalif, he holds the secret of the Tidjaniya and the power of true spiritual training that leads the disciples to discover the mysteries of Allah.

On Monday, September 27th, 2009, he inaugurated the holy place of Medina Cheikh with a Wazifa. This area was also the exact place of inauguration of this planet earth, when the prophet Seydi Ahmed went there for the first time before the arrival of our forefather Adam. He was accompanied by Mawlaya Cheikhou Tidjani and the Khoutboul Akhtaaboul Kabîr. They occupied an area of 150 m2 on which they prayed for the survival of the earth. To reiterate this moment of pure spiritual immersion Seydi M. El Cheikh matched this area to the headquarters of Medina Cheikh where he settled on Monday, May 10th, 2010. Since then, the Wazifa and “Khadaratoul Jummah” sessions of the “Dahiratoul Imaane” took place at this house full of lights and mysteries.

In 2011, Seydi Mouhamed El Cheikh married the saint Sokhna Oulimata Diop, to whom he had already given the Tidjani Wird. In 2012, Sokhna Oulimata is blessed with a child called Sokhna Bineta. Her namesake Sokhna Bineta Sene is the first woman to receive the Wird from Seydi M. El Cheikh, in this world.

On April 10th, 2013, right after celebrating his 30th birthday, he officially began his mission to bring to the world the hidden spiritual dimension of Mawlaya Cheikhou Tijani.  Apart from the night celebrating Mawlaya Cheikh which correspond to the closure of the “Bourde” sessions, the night of “Mawlid” and the celebration of his birthday, Sanguebi lectures annually in several cities in Senegal.

All of his achievements come with this mission, which we consider to be a divine gift to humanity. Already, at the age of 33, he is the perfect guide for thousands of young people and adults who before were not able to discover the light of Tidjaniya and whom Sanguebi gave them graciously as he is the source of that light.